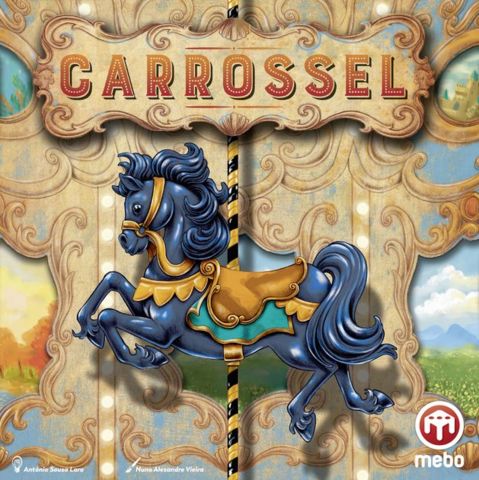 Four brothers own an old merry-go-round (carrossel) and are working together to sell as much tickets as possible while at the same time competing to see who sells the most tickets by the end of the day!

With charming components and artwork Carrossel aims to bring up to 4 players together around board that rotates between each play, and where everything is done simultaneously with almost zero-downtime: Players choose, reveal, resolve and score every single play at the same time without ever becoming chaotic.

Carrossel is a family abstract strategy game for up to four players. Players play on the side of the board that rotates to meet them each round. At the beginning of the game, client cards are drawn and placed in front of each ticket booth in sets of three. In each round, all players simultaneously choose and play one of their carrossel cards, numbered from 1 to 12, and one of their carrossel tiles that come in twelve tiles of four different colors/types, plus two wild tiles. The carrossel tiles are simultaneously placed on the spaces indicated by the carrossel cards. Players are looking to get three carrossel tiles in a row that match the three corresponding client cards. Whenever they achieve this, they place client stand-ups on each of them to show that those tickets have been sold and give the cards to the respective players who earned them (the owners of the carrossel tiles).While it is possible to complete a sequence with only your own tiles, most sequences will be completed by using tiles from other players. Making sure you get more points out each sequence than any other player is a strong path to victory. Also there are 4 variable endgame objectives that will score additional points to those who complete them.

The game ends when either one player cannot perform a legal play or the client deck runs out. The player with the most total victory points (clients + objectives) wins.